HILLSBORO, Mo. — For the last four years, the Cape Central football team has been bestowed with the honor of district champion, a distinction that each senior has carried throughout his high school career.

But as it goes, all good things must come to an end at some point.

The top-seeded Hillsboro Hawks imposed their will in the first half and overcame a fierce comeback from the third-seeded Tigers, gouging out 282 yards rushing in a 36-28 victory Friday night in the Class 4 District 1 championship at Hillsboro High School.

The win brings an end to Central’s four-year reign atop the district and gives the Hawks their first title since 2012.

“You go week to week, and you just hope you’re getting better and better. And I think the last couple of weeks, they’ve proven that,” Hillsboro coach Lee Freeman said. “Their effort and their attitude and just their overall approach in handling the adversity that they’ve had thrown at them … I couldn’t be more proud of our kids.” 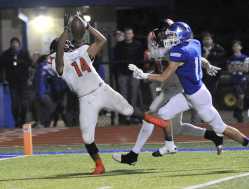 The Tigers (7-5) faced a 28-14 deficit at halftime but scored a pair of touchdowns in the third quarter to tie the game at 28-all heading into the final period.

On third-and-6, sophomore quarterback Cameron Cox scrambled out of the pocket and found Austin Parker for a 35-yard completion that flipped the field and kept Central alive inside Hillsboro territory. Cox connected with Joseph Baker for a 22-yard reception to the 5-yard line, and three plays later, Baker scored on a 1-yard run to cut Hillsboro’s lead to 28-21 with 3 minutes, 48 seconds remaining in the quarter.

After the Hawks (9-3) turned the ball over on downs, Cox answered on the following play, delivering a 43-yard TD pass deep over the middle to Baker that tied the game at 28-28 with 40.4 seconds left in the period.

“There was a half in that ball game where we really had to have some things happen against an opponent that was making it very difficult, and we made it happen,” Central coach Arlen Pixley said. “We got back to where we got things tied back up. … They’re a bunch of guys who never quit fighting. They play hard for four quarters, and that’s what we preach. And that’s what it takes.

“We had some unfortunate injuries tonight that kind of led to some things and a couple costly turnovers to a team that doesn’t need any more opportunities than they’re already going to get, and when they do, they just chew on that clock. And you start running out of time. You’ve got to start dialing up bigger plays in your offense, and we did that. We were actually able to hit some of those. We just came up short.”

The Hawks took the ensuing possession and marched 80 yards in 14 plays, moving the chains six times along the way. The long scoring drive ended with a 2-yard run by quarterback Tyler Isaacson with 6:10 left in the game, and the Tigers were never able to respond.

On the next play from scrimmage, Hillsboro regained possession when a bad pitch was recovered at the Central 26. The Hawks went four-and-out, and the Tigers responded by driving the ball into Hillsboro territory. However, Central stalled out and turned the ball over on downs at the 40. 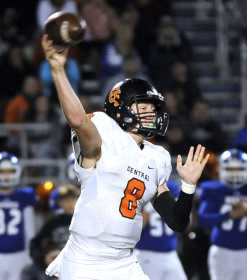 Once again, the Hawks went four-and-out, this time setting Central up with great field position at the Hillsboro 38. With no timeouts remaining, the Tigers were unable to move the ball, as three incompletions and a 6-yard sack ended the rally.

Central struggled to consistently move the ball on the ground, finishing with just 74 yards on 35 rushes (2.1 yards per rush). Aaron Harris was bottled up for 36 yards on 12 rushes, while Baker added 5 yards on five totes.

The Tigers committed to their passing game in the second half, with Cox as the beneficiary. He finished 11-of-25 passing (44 percent) for 216 yards and two TDs.

“When they’re packing box with eight or nine guys and are really trying to take care of one guy, somebody else has got to start making plays, and Cameron was forced into that situation to make plays,” Pixley said. “You talk about him being a sophomore all you want, but he stepped up and made a few plays tonight. … He made a couple huge throws for us at times, and then he turns around and maybe runs around a little too much sometimes instead of delivering the football because of a lack of confidence.

“He’ll be back, and we’re glad to have him back. We’re excited about the young bunch we have. We have a sophomore-laden team right now that’s coming back, and we’ll see how good those guys are as juniors if they all stick together. There’s roughly 18, 19 of those guys that’ll be seniors on our squad in a couple years.”

Central took the opening possession of the game and drove 59 yards in 14 plays before stalling out inside the 10.

Hillsboro answered with a 12-play, 93-yard scoring drive that was ended when Joe Garner dashed into the end zone from 22 yards out. Garner ran in the two-point conversion to give the Hawks an 8-0 advantage with 1:53 left in the first quarter.

“They just kept doing what they do,” Pixley said about Hillsboro. “I think, particularly in the first half, we were kind of waiting around for somebody else to make the play.”

The Tigers committed the first of their two turnovers on the next possession when a bad handoff allowed Hillsboro to take over at the Central 23. Five plays later, Luke Skaggs scored on a 13-yard run to extend the Hawks’ lead to 14-0 at the 11:18 mark of the second quarter.

Central was forced to punt on its next possession, but Hillsboro gave the ball right back when the Tigers recovered a fumble at the Hawks’ 25. Central made the hosts pay, finding pay dirt on a 1-yard run by Harris that cut the deficit to 14-6 with 6:45 left until halftime.

A 58-yard return on the ensuing kickoff gave the Hawks a short field to work with, as Garner scored from 1-yard out to cap a 37-yard drive and give Hillsboro a 20-6 lead with 2:07 to play before the break.

Central moved quickly on its next possession. Cox hit Baker for a 26-yard completion before the two connected again two plays later, this time for a 24-yard TD. Cox ran in the two-point conversion to pull the Tigers within 20-14 at the 1:08 mark.

Baker led Central in receiving with 140 yards and two TDs on six catches.

“It’s tough when you’re running like that, and the ball’s kind of fluttering,” Pixley said about Baker. “… He did a good job of concentrating and focusing and keeping his hands together.”

The Hawks countered with the biggest play of the game on the ensuing possession.

On second-and-4, Isaacson found Michael Keller streaking down the right sideline behind the Tigers’ secondary, as Keller made the reception and bursted into the end zone for a 65-yard TD with 25.1 seconds left on the clock. A run by Garner on the two-point attempt gave Hillsboro a 28-14 lead at halftime.

Out of an effective double wing offense, the Hawks averaged 4.4 yards per carry on 64 rushes. Skaggs led the way with 20 carries for 91 yards, while Garner added 22 totes for 90 yards. Keller finished with a team-high 152 yards from scrimmage, including 10 carries for 87 yards, and Isaacson chipped in 22 yards on seven rushes. 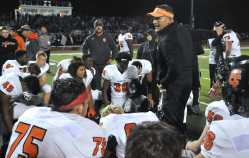 Cape Central coach Arlen Pixley talks to his players after their 36-28 loss to Hillsboro in the Class 4 District 1 championship Friday, Nov. 3, 2017 in Hillsboro, Missouri.
Fred Lynch

Hillsboro finished with 347 total yards of offense but was limited to only 128 in the second half, as all but one of its second-half drives ended in a turnover on downs.

“Take your hats off to Hillsboro. They stayed the course. They did what they did, and they didn’t waver from the game plan,” Pixley said. “… In that second half, we had all 11 guys, on offense and defense, trying to make the play, and you kind of saw what we could do.

“The loss doesn’t define who they are. I’m really proud of the heart that they really had to show in the second half to overcome the deficit.”

The loss brings an end to the high school careers of 17 seniors, including the school’s all-time leading rusher in Harris, who departs from the program as a three-time district champion.

“Cape Central football has meant everything to me,” Harris said. “… It means a lot to have played in this game all four years. It’s like a treat for me. I’m blessed and very grateful for everything.”

Pixley was also appreciative of the efforts from his group of seniors in laying a solid foundation for the future of the Tigers’ program.

“Wins and losses, yeah, they come and go, and we’re on the backside of this right here. But if anything, it’s molded these men just a little bit more into who they’re going to be someday, and that’s what this is all about.”